Growth management is not new in Northern Nevada 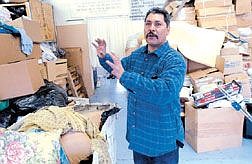 Rick GunnRick DeMar talks on the phone in his office at the Builders Association of Western Nevada on Tuesday afternoon. DeMar, executive officer of the group, is happy with Carson City&#039;s growth management. &#039;Our growth cap has been in place many years,&#039; he said. &#039;It&#039;s a successful program. We didn&#039;t let the no-growthers dictate to us how to run our county.&#039;