Mustang memorabilia on the auction block in December 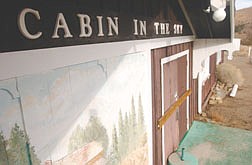 The Cabin in the Sky, a closed restuarant in Gold Hill, was seized by the United States Department of the Treasury and will be auctioned on Dec. 14 after its owner failed to pay back owed taxes. Photo by Brian Corley