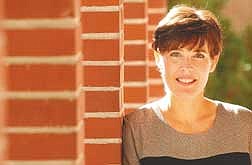 Photo by Rick GunnMary Works was recently named as the new executive director of the Brewery Arts Center.