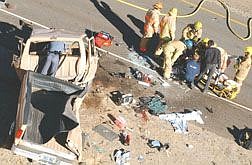 Douglas County rescue personell stabilize a victim of a multicar before he was Care-flighted to Washoe Med after an accident near Mica Dr. Friday afternoon. The three-car accident took place in the southbound lane of highway 395 killing two. photo by Rick Gunn