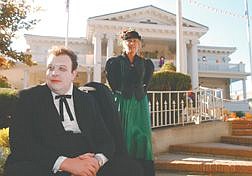 Keith Anderson, left and Theresa Sweet stand in front of the Governor&#039;s Mansion during the Ghost Walk Saturday. Anderson played the part of Governor John Jones and told stories of a haunted grandfather clock and of a ghost of a little girl that plays hop-scotch in the Mansion. Photo by Brian Corley