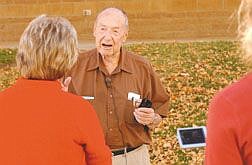 Bond committee member Kay Scherer interviews Don Dondero about his years at Carson High School when it was where Bordewich-Bray Elementary School is now. Dondero supports the bond to expand the school. Photo by Rick Gunn.