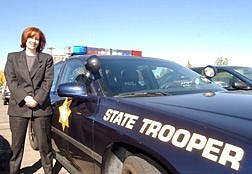 Jacquelyn Sandage is the recently became the first Nevada Highway Patrol trooper to be promoted to Lieutenant. Photo by Brian Corley