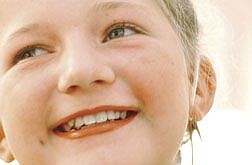 11-year-old Briana Collings lost her hearing from meningitis in march. In August, Briana recieved an operation which included coccular implant to restore her hearing. photo by Rick Gunn