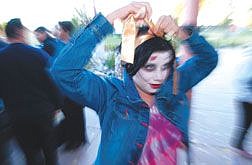 Rick GunnLuci Ann Zuend, 16, a Carson High School student, puts the finishing touches on her costume Tuesday evening at Mills Park. Zuend is part of the Ghost Train, a joint project between the Carson High drama students and the Carson City Train Association that offers a fun, and frightening, ride for children.