Train set up to celebrate Halloween 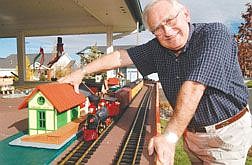 Rick GunnJohn Amantea shows his model train set in front of his house at 2162 Courtside Circle. He is prepared for nearly 1,000 children to trick-or-treat -- and check out his trains -- tonight.