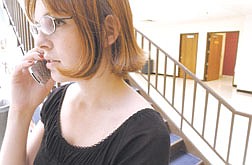 Jenae Wilkens, 17. talks to her mother on a cell phone Tuesday at Carson High School. photo by Rick gunn