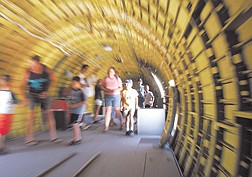 Spectators check out the inside of this Orion P3 aircraft built in 1964 by Lockheed during the Fly-In at Minden-Tahoe Airport Saturday. The plane was used for anit-submarine warfare.