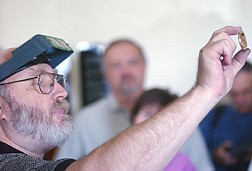 Ken Hopple, a coin press operator, holds up a coin to onlookers at the Nevada State Museum Friday. The press at the Museum was in operation minting coins for the 100th anniversary of the Gold Field Mining Camp. Photo by Brian Corley