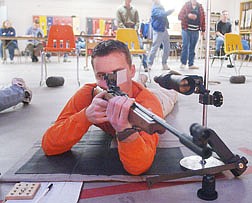 Chad Gilmore takes a chance to get comfortable before the prone portion of a rifle match Saturday at the Carson High School&#039;s JROTC rifle range. The Naval JROTC program fired shots shoulder to shoulder in a rifle team match for the first time with teams from as far away as Apache Junction, just outside Pheonix, Ariz. Normally teams fire and mail their targets in to be judged. Photo by Brian Corley