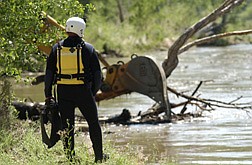 A Search and Rescue team member watches the waterTuesday morning while a backhoe clears a dense debris field from the Carson River location where a Dayton man went missing. photo by Rick Gunn