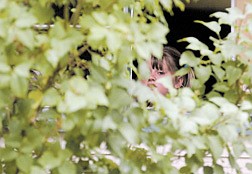 Katelynn Creonn, 9, of Carson, peeks out a window at the Boys &amp; Girls Club to look at the rain Monday afternoon.