Wife prays for Nevadan among Marines missing in Iraq 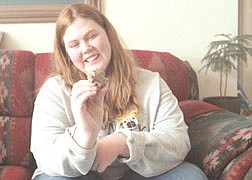 Tina Cline received word on Tuesday, Mar. 25, 2003, that her husband, Marine Lance Cpl. Donald J. Cline, Jr. is missing in fighting in Iraq. Cline, shown at a family home in Sun Valley, north of Reno, is holding a small pickup truck that her husband carved out of wood in Iraq and mailed to their 2-year-old son Dakota.