Greatest hurdle for the disabled is prejudice 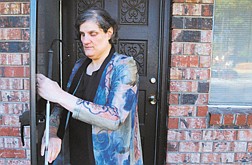 photo by Rick GunnChristine Welter leaves her Carson City home Tuesday morning. Although blind, she is proficient in telephone switchboard operation and looking for a job.