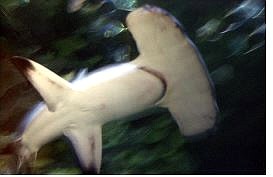 Associated Press A great hammerhead shark swims in a saltwater tank at the Shark Reef at Mandalay Bay Dec. 1 in Las Vegas. The shark died Thursday of intestinal injury and infection.