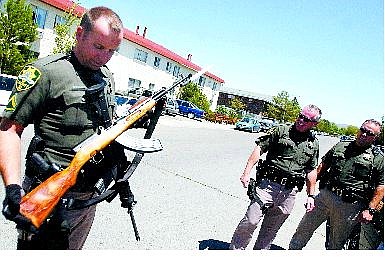 BRAD HORN/Nevada Appeal Carson City Sheriff Deputy Gary H. Underhill holds the SKS Russian assault rifle that was fired twice from an apartment&#039;s balcony in Carson CIty on Saturday. Below is suspect Manual Vargas-Rangel, 41, who was arrested on suspicion of firing an assault rifle near children at a swimming pool.