Dayton High graduates march, except one 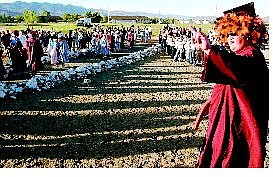 Mark Scott, 19, waves to Dayton High School graduates as they walk onto the field at the beginning of graduation ceremonies at the school Thursday evening. BRAD HORN Nevada Appeal