Taste of Downtown sold out before it began 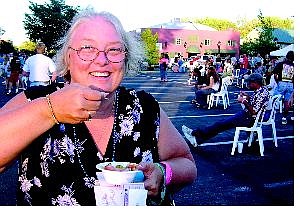 Charlene Ellis of Thousand Oaks, Calif., enjoys a bite from one of the restaurants in Saturday&#039;s Taste of Downtown, a fund-raiser for Advocates to End Domestic Violence. Ellis said she liked Daddy Dicks&#039; spicy jambalaya.