Discovery of rare plants could postpone land auction near Vegas 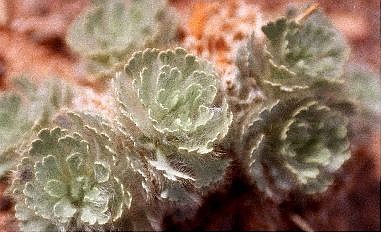 Above is a February 2001 photo of Las Vegas bearpoppy, one of two rare plant species whose discovery threatens to postpone a Southern Nevada land auction in February 2005 and block plans to build thousands of homes in a swath of desert just north of Las Vegas. At left is the endangered Las Vegas buckwheat taken from the State of Nevada Department of Conservation and Natural Resources Web site.