Medical center gives newborns something to look forward to 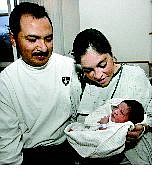 Cathleen Allison/Nevada Appeal Rueben and Cathlena Lara hold 6-pound, 10-ounce baby Kimberly on Friday after she was born in their car on the way to the hospital Thursday night.