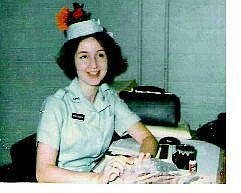 Red Cross Social Worker Jan Bachman (now retired from the Carson City Library) is shown after returning from a festive trip to Mexico in 1965.