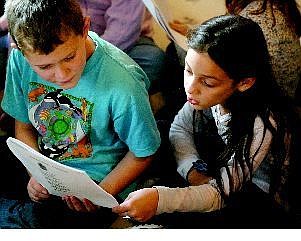 Third-graders Nathanial Bolle, 8, and Ariana Arias, 8, from Fritsh Elementary School, enjoy their last day at school before winter break by singing &quot;Feliz Navidad&quot; while on a field trip to Bliss Mansion on Wednesday.