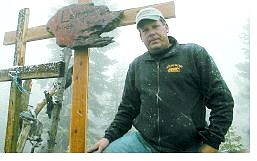 Tim Lampe stands near the cross his family erected on the site where his parents were killed 41 years ago Tuesday.