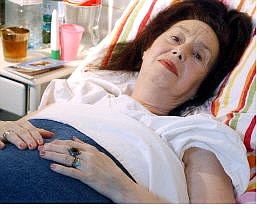 Adriana Iliescu, the 66-year-old Romanian who gave birth to a baby girl Eliza Maria on Sunday is seen in an intensive care unit at the Giulesti Maternity Hospital in Bucharest, Romania, Monday Jan. 17 2005. Doctors said the 66-year-old Romanian woman is the world&#039;s oldest recorded woman to give birth. The child&#039;s twin sister was stillborn, they said. The girl weighed just 1.45 kilograms (3.19 pounds), less than half the weight of an average newborn.(AP Photo/Vadim Ghirda/pool)