Truck loses brakes, flips at base of summit 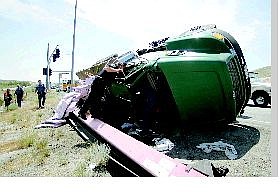 BRAD HORN/Nevada Appeal Gregory Fair, of Reno, looks inside the cab of the truck he was driving after it rolled over when the brakes failed while heading east into Carson City on Highway 50 on Friday.