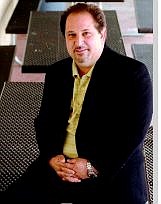 John Procaccini is the new director of the Brewery Arts Center.