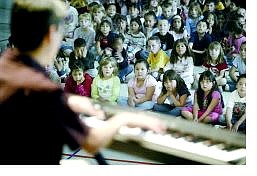 Cathleen Allison/Nevada Appeal Keyboardist Jim Martinez plays for students at Empire Elementary School Monday afternoon as part of a program to educate them about jazz music.