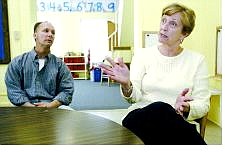 Cathleen Allison/Nevada Appeal The Rev. Jeff Paul listens as Debbie Cowan talks about the closing of the Rectory Christian Preschool at St. Peter&#039;s Episcopal Church. A farewell celebration will be held at 5 p.m. Wednesday.