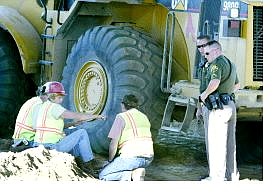 Cathleen Allison/Nevada Appeal Carson City Sheriff&#039;s deputies talk to unidentified construction workers following a construction accident Tuesday afternoon on College Parkway, near Research Way. The injured man, who was run over by a loader, was taken to Washoe Medical Center by Care Flight.