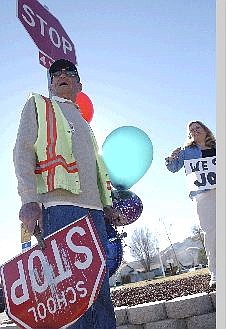 Rick Gunn/Nevada Appeal Seeliger crossing guard Joe Terzyk stands near Seeliger Elementary School with Seeliger principal Laurel Terry on Friday during his last cross-walk duty. Joe was retired after tending the cross walks since 1998 and his retirement was celebrated by kids, adults and passersby.