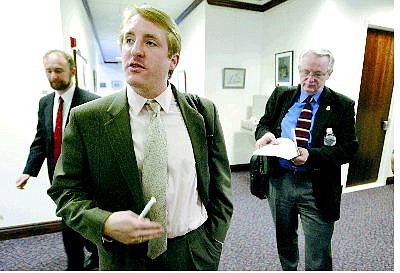 Cathleen Allison/Nevada Appeal Rod Kampia, head of the Washington D.C.-based Marijuana Policy Project, center, talks in the hallway of the Legislature on Thursday following a hearing on an initiative petition that would have legalized the possession of marijuana in Nevada. Dr. Mitchell Earleywine, left, and Jack Cole also testified in support of the measure before the Assembly Judiciary Committee. The committee declined to vote Thursday and the non-vote automatically puts the issue on the November 2006 ballot.