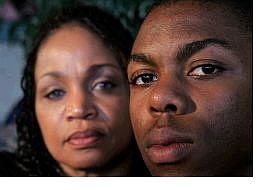 Chris Carlson/Associated Press Crystal Farr and her son, Sam, pose for a photo at their home in Murrieta, Calif., Friday. Farr and her son are suffering a barrage of racist slurs and even an attack.