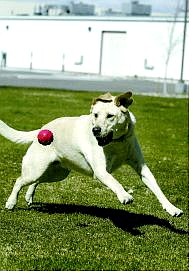 Cathleen Allison/Nevada Appeal Ginger just misses the ball thrown by her owner, Joy Callahan of Alaska, Monday afternoon at Fuji Park. Monday&#039;s weather came in like a lion and out like a lamb after Carson City woke up to a morning of light snow, by afternoon, the sun was shining.