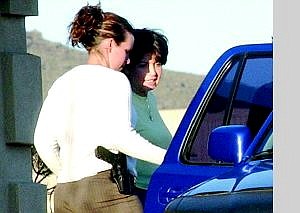 Rick Gunn/Nevada Appeal Carson City Sheriff&#039;s detectives arrest Norma Childers, right, Tuesday. She is the owner of Sugar and Spice Preschool and Day Care and was arrested on two felony charges of child abuse for allegedly putting duct tape on the mouths of two children.