Sneaking a peek at the future of medicine 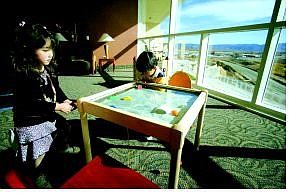 BRAD HORN/Nevada Appeal Hana Ikehara and her twin brother, Kai, play in a waiting area at Carson Tahoe Regional Medical Center during an open house Saturday. The 4-year-olds&#039; grandmother Mary Stuchell worked at Carson-Tahoe Hospital for 25 years as a nurse and administrative coordinator.