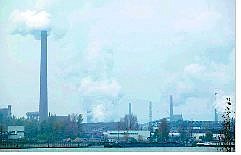 An industrial area twice the size of the town of Linz billows smoke from smokestacks. The industry began as a tank and bomb manufacturing area, then was privatized after WWII and is now the biggest supplier of sheet metal to BMW and Mercedes Benz.