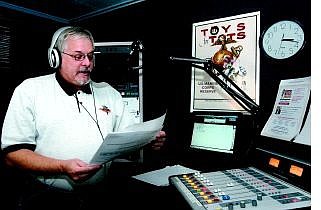 Chad Lundquist/Nevada Appeal Radio personality for KPTL/KCMY radio Monty Wolf stands in the studio Monday talking about the Toys for Tots drive-through toy drive to be held from 9 a.m. to 3 p.m. Friday at the Carson Valley Wal-Mart on Topsy Lane. The live remote is from 9 a.m. to noon and includes free concert/show tickets to lucky donors.