No holiday rest for Nevada's deployed troops; Santa's getting ready 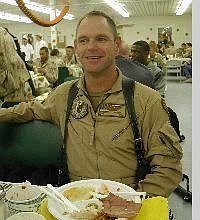 CW4 Daniel Walters, 39, from Genoa, sits down to a turkey dinner Thursday in Kandahar, Afghanistan where he is stationed with the Nevada National Guard Delta Company, 113 Aviation unit. provided to the Nevada Appeal