Riding the rails to benefit Toys for Tots 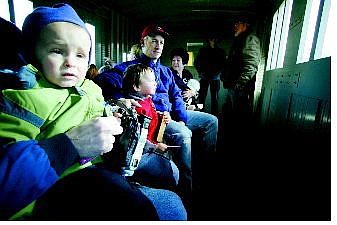 BRAD HORN/Nevada Appeal Gabriel Bonicatto, 2, of Reno, enjoys his first train ride at the Nevada State Railroad Museum on Saturday. Pictured center to back are Camdyn, 3, and his father Scott Meikrantz, of Carson, and Shirley Costarella, of San Jose, Calif. Free train rides were given in exchange a donation to the Toys for Tots program.