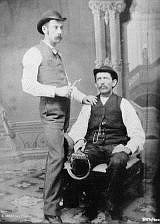 Nevada State Museum photo This print of Doc Holliday, left, serving as a dentist will be auctioned off during the Tin Cup Tea Saturday at the Governor&#039;s Mansion.