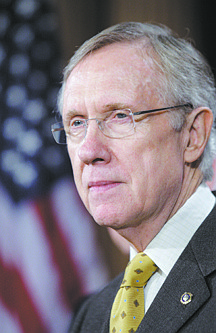 **ADVANCE FOR MONDAY, DEC. 7** FILE - This Nov. 18, 2009 file photo shows Senate Majority Leader Sen. Harry Reid, D-Nev., pausing during a news conference on health care reform on Capitol Hill in Washington. Reid is a supporter of a federal program that began as a safety net for Pacific Northwest logging communities hard-hit by battles over the spotted owl in the 1990s that has morphed into a sprawling entitlement. Reid called the timber program a personal priority that supports &quot;the lifeblood of communities all across America, and particularly in the West.&quot; (AP Photo/Alex Brandon, File)