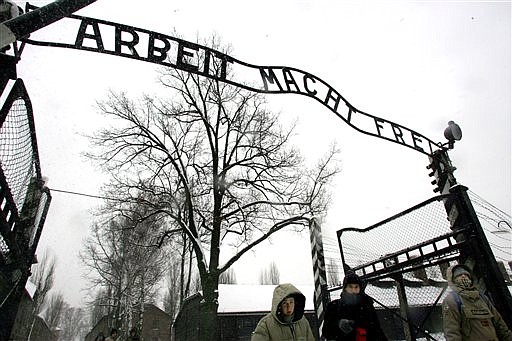 FILE - In this Jan. 26, 2005 file photo visitors walk through the entrance gate of the Auschwitz Nazi concentration camp in Oswiecim, southern Poland, a day before the commemorations of the 60th anniversary of the liberation of the Auschwitz Nazi concentration camp by Soviet troops. Polish police say the infamous iron sign over the gate to the Auschwitz memorial site with the cynical phrase &quot;Arbeit Macht Frei&quot; _ German for &quot;Work Sets You Free&quot; _ has been stolen. Police spokeswoman Katarzyna Padlo said police believe it was stolen between 3:30 a.m. and 5 a.m. Friday, Dec. 18, 2009, when museum guards noticed that it was missing and alerted police. (AP Photo/Herbert Knosowski, File)