An adventure in central Nevada 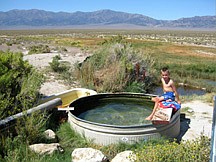 Jeff Moser/Submitted PhotoCharlie Moser tests the water at Spencer Hot Springs in Big Smokey Valley. Tubs are set up with movable pipes to allow you to customize the water temperature.