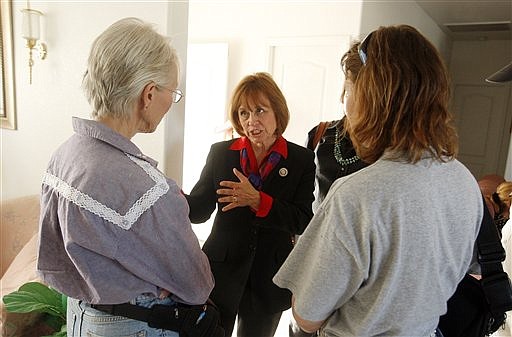 FILE - In this May 18, 2010, file photo Sharron Angle, center, a Republican Senate candidate endorsed by the Tea Party Express, holds a meet and greet at a home in Pahrump, Nev. &quot;A tsunami of conservatism is coming in waves across our country,&quot; says Angle, who is running for the nomination to oppose Senate Majority Leader Harry Reid. &quot;My message is, this is what people want.&quot; Tea party activists figure in an unpredictable race in Nevada, where unemployment is 13.7 percent, and Reid has poll numbers as weak as any incumbent in the country. (AP Photo/Isaac Brekken, File)