Concert fundraiser raises the roof, and $20,000 for Greenhouse Project 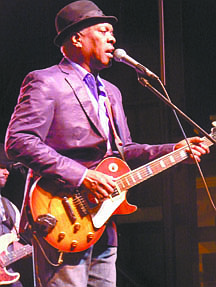 Sally Roberts/Nevada AppealBlues great and multi-Grammy winner Booker T. Jones, who is primarily known for his handiwork on the organ, picked up his guitar for a few licks during Wednesday evening&#039;s Concert Under the Stars at Adele&#039;s restaurant. The concert was a fundraiser for the Greenhouse Project.