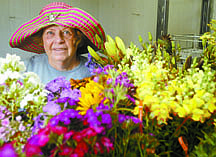 Shannon Litz/Nevada AppealCarole Smith of Smith &amp; Smith Farms is seen with cut flowers ready for bouquets inside her walk-in cooler on Wednesday.